I am getting sworn in to serve on the Big Water, UT, Town Council this coming Monday evening. Kane County has a history rich in pioneer ancestry, cowboys and the West. It also has a history rich in women’s rights. Kanab, UT, was the first town to elect an all women form of governance with the Mayor and all councilors being women. 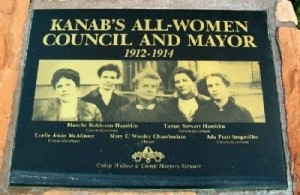 First All Women Council in U.S.

This would even be news today, 100 years later, but in 1912 it was stunning. No where had this happened in the country and it was not until 1920 with the passage of the 19th Amendment to the Constitution stating “The right of citizens of the U.S. to vote shall not be denied or abridged by the U.S. or by any state on account of sex.” that Women’s Suffrage had truly come to pass.

Utah has a long standing place in the Woman’s Suffrage movement having granted women the right to vote in 1870 thus enfranchising over 17,000 women, the largest voting female population in the world and only second behind the state of Wyoming.

Emmeline B. Wells became the most powerful voice in the suffrage movement nationwide and stated woman should be “recognized as a responsible being,” with a right to choose her own destiny. In 1887 the federal government passed the Edmunds-Tucker Bill, disfranchising all Utah women. In 1896 women again were granted the ‘right’ to vote after Utah officially became the 45th state.

The Kanab City Council accomplished many things during their term including laying out the cemetery, getting dikes and bridges built to protect Kanab from flood waters, and adopting animal control ordinances. It is an interesting testament that the current Mayor of Kanab, UT, is also a woman ~ Nina Laycook.

Women of the West Museum